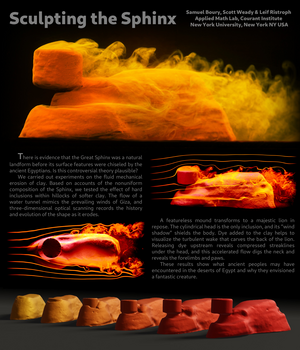 There is evidence that the Great Sphinx was a natural landform before its surface features were chiseled by the ancient Egyptians. Is this controversial theory plausible?
We carried out experiments on the fluid mechanical erosion of clay. Based on accounts of the nonuniform composition of the Sphinx, we tested the effect of hard inclusions within hillocks of softer clay. The flow of a water tunnel mimics the prevailing winds of Giza, and three-dimensional optical scanning records the history and evolution of the shape as it erodes.
A featureless mound transforms to a majestic lion in repose. The cylindrical head is the only inclusion, and its “wind shadow” shields the body. Dye added to the clay helps to visualize the turbulent wake that carves the back of the lion. Releasing dye upstream reveals compressed streaklines under the head, and this accelerated flow digs the neck and reveals the forelimbs and paws.
These results show what ancient peoples may have encountered in the deserts of Egypt and why they envisioned a fantastic creature.