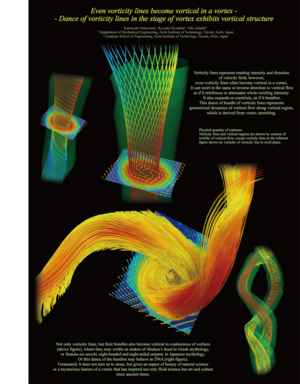 Vorticity lines in fluid dynamics represent rotating intensity and direction of velocity field, however, even vorticity lines often become vortical in a vortex. It can swirl in the same or inverse direction to vortical flow, and expands or constricts, which exhibits geometrical dynamics of vortical flow along vortical region.

Not only vorticity lines, but their bundles also become vortical in coalescence of vortices, where they may writhe as snakes of Medusa’s head in Greek mythology or Yamata-no-orochi (eight-headed and eight-tailed serpent) in Japanese mythology, or behave as DNA. These give an aspect of beauty of natural science, or a mysterious feature of a vortex that has inspired not only fluid science but art and culture since ancient times.