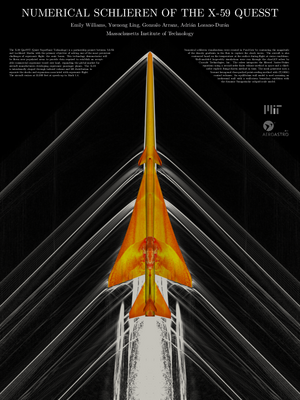 The X-59 QueSST (Quiet SuperSonic Technology) is a partnership project between NASA and Lockheed Martin with the primary objective of solving one of the most persistent challenges of supersonic flight: the sonic boom. This technology demonstrator will be flown over populated areas to provide data required to establish an acceptable commercial supersonic travel over land, expanding the global market for aircraft manufacturers developing supersonic passenger planes. The X-59 is intentionally shaped through tailored volume and lift distribution to separate the shocks and expansions associated with supersonic flight. The aircraft cruises at 55,000 feet at speeds up to Mach 1.4.

Numerical schlieren visualizations were created in ParaView by contouring the magnitude of the density gradients in the flow to capture the shock waves. The aircraft is also contoured based on the temperature at the surface during flight at cruise conditions. Wall-modeled large-eddy simulations were run through the charLES solver by Cascade Technologies, Inc. The solver integrates the filtered Navier-Stokes equations using a second-order finite volume method in space and a third-order explicit Runge-Kutta method in time. The mesh generator uses a Voronoi hexagonal close-packed point-seeding method with O(100M) control volumes. An equilibrium wall model is used assuming an isothermal wall with a wall-stress boundary condition with the dynamic Smagorinsky subgrid-scale model.