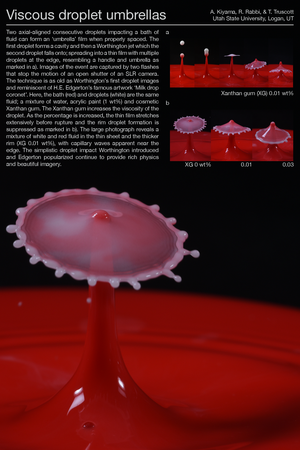 Two axial-aligned consecutive droplets impacting a bath of fluid can form an ‘umbrella’ film when properly spaced. The first droplet forms a cavity and then a Worthington jet which the second droplet falls onto; spreading into a thin film with multiple droplets at the edge, resembling a handle and umbrella as marked in a). Images of the event are captured by two flashes that stop the motion of an open shutter of an SLR camera. The technique is as old as Worthington’s first droplet images and reminiscent of H.E. Edgerton’s famous artwork ‘Milk drop coronet’. Here, the bath (red) and droplets (white) are the same fluid; a mixture of water, acrylic paint (1 wt%) and cosmetic Xanthan gum. The Xanthan gum increases the viscosity of the droplet. As the percentage is increased, the thin film stretches extensively before rupture and the rim droplet formation is suppressed as marked in b). The large photograph reveals a mixture of white and red fluid in the thin sheet and the thicker rim (XG 0.01 wt%), with capillary waves apparent near the edge. The simplistic droplet impact Worthington introduced and Edgerton popularized continue to provide rich physics and beautiful imagery.