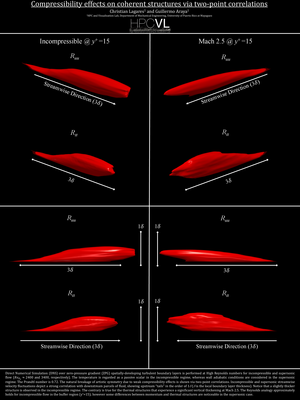 Direct Numerical Simulation (DNS) over zero-pressure gradient (ZPG) spatially-developing turbulent boundary layers is performed at high momentum-thickness Reynolds numbers for incompressible and supersonic flow (2400 and 3400, respectively). The temperature is regarded as a passive scalar in the incompressible regime, whereas wall adiabatic conditions are considered in the supersonic regime. The Prandtl number is 0.72. The natural breakage of artistic symmetry due to weak compressibility effects is shown via two-point correlations. Incompressible and supersonic streamwise velocity fluctuations depict a strong correlation with downstream parcels of fluid, showing upstream “tails” in the order of 1delta (where delta  is the local boundary layer thickness). Notice that a slightly thicker structure is observed in the incompressible regime. The contrary is true for the thermal structures that experience a significant vertical thickening at Mach 2.5. The Reynolds analogy approximately holds for incompressible flow in the buffer region (y+ = 15); however some differences between momentum and thermal structures are noticeable in the supersonic case.