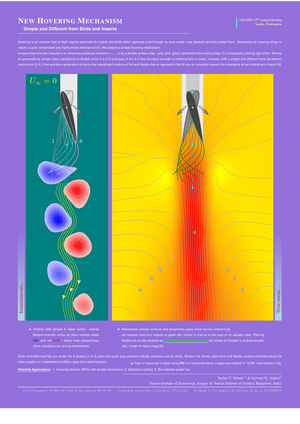 Hovering is an extreme feat of flight regime exercised by insects and birds which generate a jet through co-axial vortex rings stacked vertically below them. Kinematics of hovering wings in nature is quite complicated and highly three-dimensional [1]. We present a simple hovering mechanism.

Images show the flow induced in an otherwise quiescent ambient (U∞ = 0) by a flexible surface (flap - grey, pink, green) attached to the trailing edge of a sinusoidally pitching rigid airfoil. Narrow jet generated by simple rotary oscillations of flexible airfoil is a 2-D analogue of the 3-D flow structure beneath a hovering bird or insect, however, with a simple and different force generation mechanism [3,4]. Flow and force generation is due to the coordinated motions of foil and flexible flap as opposed to the lift due to circulation around the translating wings of birds and insects [4].

Jet realizes maximum velocity at green dot, similar to that as in the case of an actuator disk. Pitching flexible foil can be modeled as ‘unsteady actuator disk / slab’ [4], similar to Ellington’s ‘pulsed actuator disc’ model of insect wings [2].

Airfoil and deformed flap are shown for 8 phases (1 to 8) over half cycle; grey patches indicate shadows cast by airfoil. Broken line shows rigid chord and flexible surface stretched along the mean-position in undeflected condition; grey dot is pitching point.

Flow is measured in water using PIV in a horizontal plane; images are rotated 90◦ CCW; more details in [3].