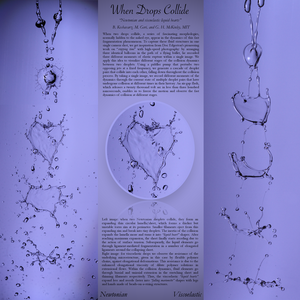 When two drops collide, a series of fascinating morphologies, normally hidden to the naked eye, appear in the dynamics of this fast fragmentation phenomenon. To capture these fluid structures in one single camera shot, we get inspiration from Doc Edgerton’s pioneering work on “stopping time” with high-speed photography: by arranging three identical balloons in the path of a flying bullet, he recorded three different moments of elastic rupture within a single image. We apply this idea to visualize different stages of the collision dynamics between two droplets. Using a piddler pump that perturbs two opposing jets at a fixed frequency, we generate a cascade of droplet pairs that collide into each other, falling down throughout the collision process. By taking a single image, we record different moments of the dynamics through the current state of multiple droplet pairs that have undergone collision at different times in their history. An air-gap flash, which releases a twenty thousand volt arc in less than three hundred nanoseconds, enables us to freeze the motion and observe the fast dynamics of collision at different stages. Left image: when two Newtonian droplets collide, they form an expanding thin circular lamella/sheet, which forms a thicker but unstable torus rim at its perimeter. Smaller filaments eject from this expanding rim and break into tiny droplets. The inertia of the collision expands the lamella more and turns it into “liquid heart” shapes. After reaching maximum expansion, the sheet finally starts receding due to the action of surface tension. Subsequently, the liquid elements go through ligament-mediated fragmentation in a number of elongated ligaments around the collapsing sheet. Right image: for viscoelastic drops we observe the resistance of the underlying microstructure, given in this case by flexible polymer chains, against elongational deformations. This resistance is due to the enhanced elongational viscosity of dilute polymer solutions in extensional flows. Within the collision dynamics, fluid elements go through biaxial and uniaxial extension in the stretching sheet and thinning filaments respectively. Thus, the viscoelastic “liquid hearts” expand less and recede faster into “falling marionette” shapes with legs and hands made of beads-on-a-string structures.