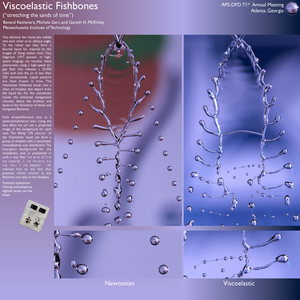 Two identical fast liquid jets collide into each other at an oblique angle. To the naked eye they form a blurred liquid fan. Inspired by the images of flying bullets from Doc Edgerton (MIT pioneer of high-speed imaging), we visualize these phenomena using a high-speed air-gap flash that releases a 20,000 volts arch into the air in less than 300 nanoseconds. Liquid patterns are then frozen in time. The Newtonian fishbones break into a chain of droplets that depart from the liquid fan. For the viscoelastic liquids, the enhanced elongational viscosity delays the breakup and leads to the formation of beads and elongated filaments.

Each droplet/filament acts as a spherical/cylindrical lens. Using the lens effect we can see a projected image of the background for each case. The falling “APS peaches” of the Newtonian liquid can form a group of droplets with a remarkably monodisperse size distribution. The hourglass background for the viscoelastic case is positioned in such a way that “the sands of time are stretched in the filaments and then relax in the droplets”.  An indirect hint to the fact that ploymer chains stretch in the filaments and relax in the droplets.