P0053: Visualization of a collective motion 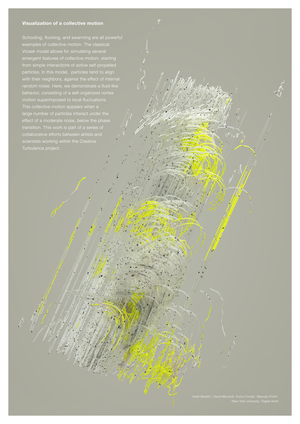 Schooling, flocking, and swarming are all powerful examples of collective motion. The classical Vicsek model allows for simulating several emergent features of collective motion, starting from simple interactions of active self-propelled particles. In this model,  particles tend to align with their neighbors, against the effect of internal random noise. Here, we demonstrate a fluid-like behavior, consisting of a self-organized vortex motion superimposed to local fluctuations. This collective motion appears when a large number of particles interact under the effect of a moderate noise, below the phase transition. This work is part of a series of collaborative efforts between artists and scientists working within the Creative Turbulence project.