P0043: A model for tracking the wakes of vertical axis turbines 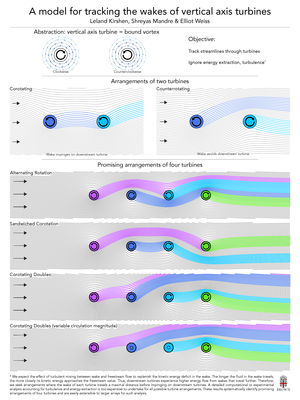 Potential flow theory is utilized by representing the effect of vertical axis turbines in freestream flow with bound vortices. Visualizing contour plots of stream functions, the wake of each turbine is tracked. Examining the case of two wind turbines demonstrates the link between opposing directions of turbine rotation and the wake of the first turbine avoiding the second turbine. This principle of counterrotation is extended to arrangements of four turbines.

We expect the effect of turbulent mixing between wake and freestream flow to replenish the kinetic energy deficit in the wake. The longer the fluid in the wake travels, the more closely its kinetic energy approaches the freestream value. Thus, downstream turbines experience higher energy flow from wakes that travel further. Therefore, we seek arrangements where the wake of each turbine travels a maximal distance before impinging on downstream turbines. A detailed computational or experimental analysis accounting for turbulence and energy extraction is too expensive to undertake for all possible turbine arrangements. These results systematically identify promising arrangements of four turbines and are easily extensible to larger arrays for such analysis.