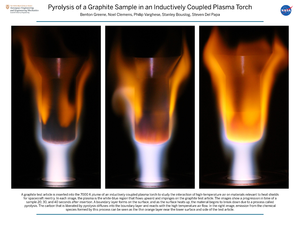 A graphite test article is inserted into the 7000 K plume of an inductively coupled plasma torch to study the interaction of high-temperature air on materials relevant to heat shields for spacecraft reentry. In each image, the plasma is the white-blue region that flows upward and impinges on the graphite test article. The images show a progression in time of a sample 20, 30, and 40 seconds after insertion. A boundary layer forms on the surface, and as the surface heats up, the material begins to break down due to a process called pyrolysis. The carbon that is liberated by pyrolysis diffuses into the boundary layer and reacts with the high temperature air flow. In the right image, emission from the chemical species formed by this process can be seen as the thin orange layer near the lower surface and side of the test article.