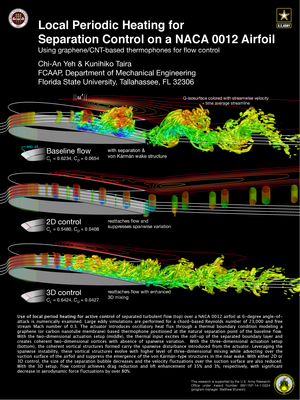 Use of local period heating for active control of separated turbulent flow (top) over a NACA 0012 airfoil at 6-degree angle-of-attack is numerically examined. Large eddy simulations are performed for a chord-based Reynolds number of 23,000 and free stream Mach number of 0.3. The actuator introduces oscillatory heat flux through a thermal boundary condition modeling a graphene (or carbon nanotube membrane) based thermophone positioned at the natural separation point of the baseline flow.  With the two-dimensional actuation setup (middle), the thermal input excites the roll-up of the separated boundary layer and creates coherent two-dimensional vortices with absence of spanwise variation.  With the three-dimensional actuation setup (bottom), the coherent vortical structures formed carry the spanwise disturbance introduced from the actuator. Leveraging the spanwise instability, these vortical structures evolve with higher level of three-dimensional mixing while advecting over the suction surface of the airfoil and suppress the emergence of the von Kármán-type structures in the near wake. With either 2D or 3D control, the size of the separation bubble decreases and the velocity fluctuations over the suction surface are also reduced. With the 3D setup, flow control achieves drag reduction and lift enhancement of 35% and 3%, respectively, with significant decrease in aerodynamic force fluctuations by over 80%.