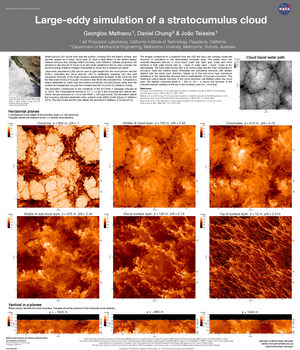 Stratocumulus clouds form near the surface, covering 20% the Earth’s surface, and typically appear as a lumpy cloud layer. Stratocumulus clouds have a large effect on the Earth’s energy balance because they strongly reflect incoming solar radiation. Climate projections are sensitive to the amount of cloud cover and small variations in the Stratocumulus area coverage can produce energy-balance changes comparable to those due to greenhouse gases.

Large-eddy simulations (LES) can be used to gain insight into the cloud physics and the factors controlling the cloud amount. LES is challenging requiring very fine grid resolutions because of the sharp inversion (temperature  increase) at the cloud top and the fine-scale forcing of buoyant convection that drives the turbulent flow. Turbulence is mainly generated by shear near the surface, (positively) buoyant plumes rising from the surface and (negatively) buoyant fluid created near the cloud top by radiative cooling.

The images correspond to a snapshot from a large-eddy simulation of a Stratocumulus cloud and show the complex multi-scale structure of turbulence in the atmospheric boundary layer. Near the surface shear dominates the turbulence structure with streaks aligned with the mean wind direction. Higher up in the sub-cloud layer turbulence transitions to the cellular-like structure that is characteristic of buoyant convection. The distinctive lumpy/cellular structure of the cloud becomes well defined within the cloud layer. The highest horizontal plane shows the structure of the turbulent–laminar interface at the cloud top.