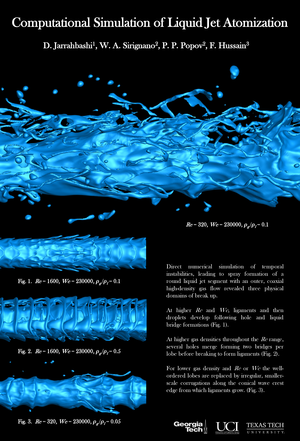 Direct numerical simulation of temporal instabilities, leading to spray formation of a round liquid jet segment with an outer, coaxial high-density gas flow revealed three physical domains of break up.

At higher Re and We, ligaments and then droplets develop following hole and liquid bridge formations (Fig. 1).

At higher gas densities throughout the Re range, several holes merge forming two bridges per lobe before breaking to form ligaments (Fig. 2).

For lower gas density and Re or We the well-ordered lobes are replaced by irregular, smaller-scale corrugations along the conical wave crest edge from which ligaments grow. (Fig. 3).