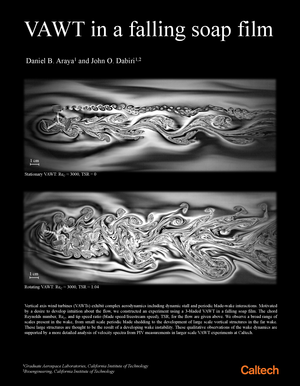 Vertical axis wind turbines (VAWTs) have the potential to greatly enhance the energy efficiency of conventional wind farming. The idea is simple; individual VAWTs are to be placed within a wind farm in a way that maximizes the overall farm's performance, rather than maximizing the performance of an individual turbine, as has been the standard practice to date. However, a major challenge that persists is a lack of understanding of the complex fluid interactions among closely spaced VAWTs. A good place to begin is to decouple the problem, and develop our understanding of the flow around an individual VAWT. The soap film visualization technique used in the present experiment is a unique method that allows for a qualitative glimpse at this complex flow with relative ease. The images presented were captured using a high-speed camera at a rate of 5,000 frames per second. The black and white bands in the images are an interference pattern created by reflected light on a thin liquid film, similar to the rainbow pattern seen in soap bubbles. This pattern moves with the flow in and around the miniature turbine, and gives a nice visualization of the intricate flow patterns, which can be further analyzed using more sophisticated techniques.